Due to strong winds, additional time was required to cross the Drake, so most of the day was spend finishing our transit of the passage and our first landing was delayed until tomorrow.

The Drake Passage probably deserves some additional explanation as it seems to take on a mystique all its own. 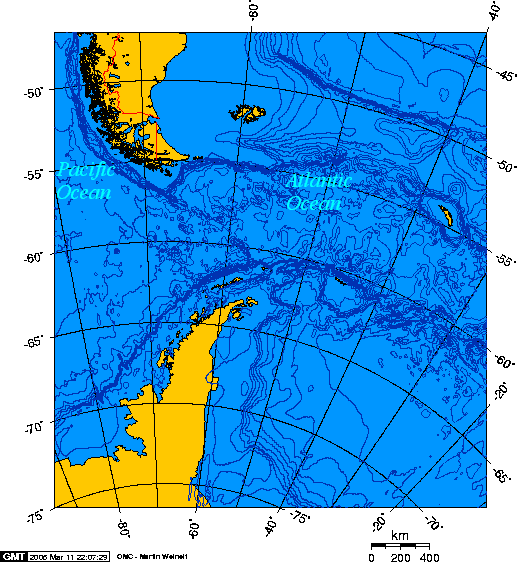 The Drake Passage is 600 mi wide – spanning the distance between Cape Horn (the tip of South America) and the South Shetland Islands (our first stop in Antarctica).  It is were the Pacific Ocean, Atlantic Ocean, and Southern Sea converge.  At this latitude there is no landmass to impeded the flow of the Antarctic Circumpolar Current which squeezes through this narrower passage.  One site estimates the flow of this current to be 600 times the volume of the Amazon.  In addition, there can be very high winds in this area.  Combine the huge current and the strong winds and you can get some very rough seas.  Having said that, there are also times when the Drake can be very calm, so when crossing the Drake, one can experience the Drake Lake or the Drake Shake.  (Map above taken from Wikipedia.)

While most of our group outwardly expressed a desire for a Drake Lake, there was a subset that saw a Drake Shake as a right of passage and secretly hoped for rough seas.  Admittedly, I fell into the latter category, after all, what’s a little seasickness between new friends.

We experienced waves that peaked at 4 meters and to us, we were rocking.  Many of us felt we had a reasonably rough crossing – that was until our expedition leader told us we just experienced a 2 on a 1-10 scale of rough crossings.  No pun intended, but that took the wind out of our sails.  To our credit, the flag was flying strong and there were white caps on the water.

We were also accompanied by some beautiful painted petrols for most of the day.

Today was also marked by our first iceberg sighting.  Trust me, if you look hard enough at the horizon, there really is a white block – it’s in the middle.

A short while later we encountered this beauty of the starboard side of the ship.  Seeing this iceberg so close was truly magical – we’d arrived.

As we continued, land came into view and Antarctica started to take shape.