We started off the day meeting the Captain of the ship.  He spoke about his experience and life at sea, followed by a brief question and answer session.  While his English was quite good (he is Argentinian and Spanish is his primary language), he had translation assistance from one of our teammates, Yalimay Jimenez.  Yali is Venezuelan, but currently lives in Perth on the western side of Australia.  She is a geochemist and is currently pursuing her PhD in hydrogeology.  She is also the mother of 2 little ones. 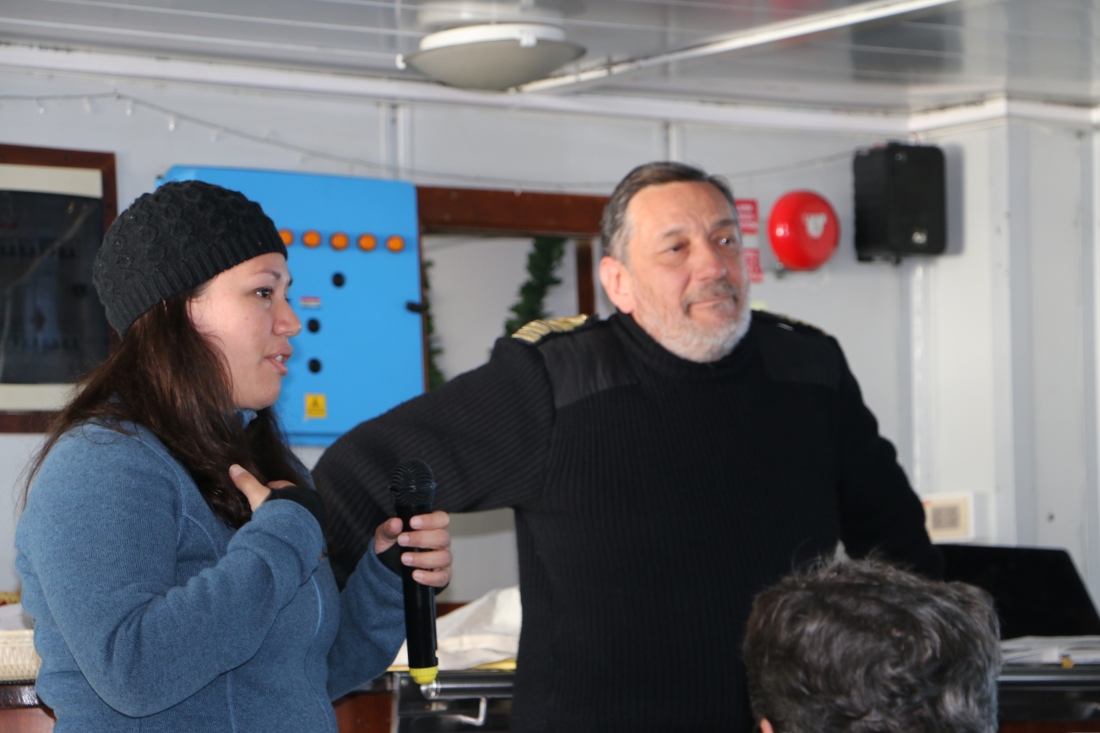 In the year leading up to our voyage, we were assigned various triads with other members of the cohort so we could start cultivating relationships before our arrival to Ushuaia.  Yalimay was in my second triad, along with Lorna Slater, an engineer, circus acrobat, and aspiring politician who lives in Scotland.  As you can imagine trying to find a time that worked for our vastly different time zones was a challenge, but we still managed to have several conference calls.  I can’t say we spent a great deal of time together on the voyage, but I think maybe it’s because we didn’t need to – we were already good friends.

Following the meeting with the Captain, we had an Emerging Issues session.  We frequently started the day with this or an Open Frame.  Different in structure, both gave us a chance to incorporate the realtime events of the voyage into the program curriculum so that appropriate issues were addressed and adjustments could be made.

Next we had our first Symposium at Sea (S@S).  The S@S is a chance for each member of the team to share their science.  It is strictly formatted to a 3 minute presentation.  At 2:30 minutes a red flag was waved, then the faculty member keeping time stood up and slowly started walking toward the speaker.  If the speaker was still going at 3 minutes, the faculty member lovingly put her arm around the speaker and took away the microphone.  I know, sounds a bit odd, but honestly it worked perfectly!  On average there were 10 speakers per S@S session.  At the conclusion of their talks, each was asked one question.

When I first heard about the S@S I wasn’t too happy.  First of all, as a surgeon, I didn’t feel like I had a “science” to talk about (presumably my Imposter Syndrome trying to resurface) and second, how could you fit anything meaningful into 3 minutes.  Turns out, the S@S was one of the best parts of the program.  Everyone was able to showcase their work and it stimulated a great deal of discussion and collaboration during the remainder of the voyage.  My S@S talk was not until later in the voyage, so more to follow.

Prior to the voyage, we were also assigned to Science Themes.  Each theme worked on a specific topic with the goal of developing a fact sheet and preparing a 20 minute presentation on the ship.  (I was in the Sustainability group.  We spoke much later in the voyage, so again, more to follow.)

Two of the science themes looked at gender related issues.  One of the groups looked at the gender gap in STEMM (science, technology, engineering, math(s), and medicine) fields and presented their work today.  They reviewed the gender fact sheet that was developed by the previous Homeward Bound cohort, confirming accuracy and making relevant updates.  Not only are there fewer women in STEMM fields, but they have lower rates of promotion and hold fewer leadership roles.  Some of the reasons for this include, “stereotypes around science and gender and biology, beliefs around intelligence, self- assessment, beliefs about spatial skills, school and University environments and processes, and implicit and workplace biases.”

To help combat these issues, the group proposed 3 actions items.  First, we work to get the Homeward Bound gender fact sheet into the hands of everyone, everywhere – scientists, teachers, university officials, politicians, etc.  The more people who know the facts, the more we can work to overcome them.  Second, we build on the Homeward Bound intercohort mentoring program.  In this last year an intercohort mentorship program was launched matching members from our group with members of prior cohorts.  (I was paired with Shelley Ball from HB1 and Rebecca Waddington from HB2.  Shelley is from Canada and is a biologist and the founder of Biosphere Environmental Education.  Rebecca is from the US and is a pilot for NOAA.)  By continuing and strengthening this program, we continue to support one another and foster scientific collaboration.  Third, they proposed a standardized workshop that could be given by any Homeward Bound member to help raise awareness and encourage more women to purse STEMM careers.

Building on the gender theme presentation, we had our first Cover Story session.  With the Cover Story, you imagine the best possible outcome – what the headline would be if your were on the front cover of a magazine – and then work to figure out how you got there.  Thinking this way felt rather abstract, so this process was quite challenging for a room filled with very concrete thinkers.

We were broken down into smaller groups, and each group was assigned one of the 3 proposals from the gender theme presentation.  Our group was assigned the topic of the standardized workshop.  Our initial ideas were all over the place, but we decided that within a year we wanted to be on the cover of Rolling Stone with the headline “Encore for the Environment”.  Over the next several sessions, we worked out how we would get there.  Sounds simple, but we had divergent opinions and our varying leadership styles became apparent.  Needless to say this activity was challenging.

In the afternoon we visited Paulet Island.  We had crossed the Bransfield Straight and the Antarctic sound to reach the island which is the remnant of an extinguished volcano.  Paulet Island is the home to an Adélie penguin colony.  An area of penguin breeding is know as a rookery.  Adjacent to the penguins was also a large area of breeding Cormorants.  Both species of birds were black and white.  Initially I didn’t realize the cormorants were also there and was very confused when it looked like the penguins were flying.  Both species of birds were rearing their young at the time of our visit.

Adélie are about 18 inches to 2 feet tall (actually all of the penguins we saw were about this height) and full of personality.  At the time of our visit, there were chicks present that were about 1 week old.  The breedings pairs were taking turns going to out to sea and returning to feed the chicks.  Adélie feed on krill (a small crustacean) and silverfish.  The Adélie are dependent on sea ice and their numbers in the Antarctic peninsula are declining as a result of increased temperatures in the region.  You can tell by the number of pictures, it was easy to fall in love. 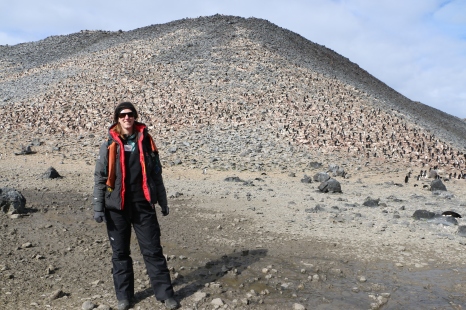 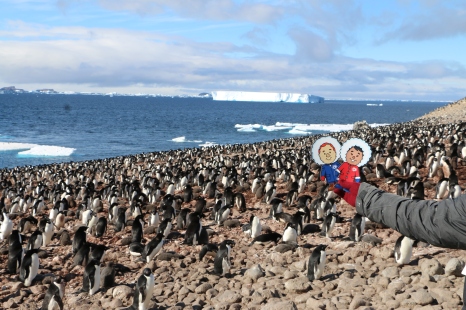 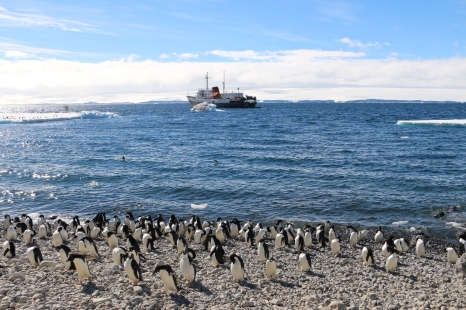 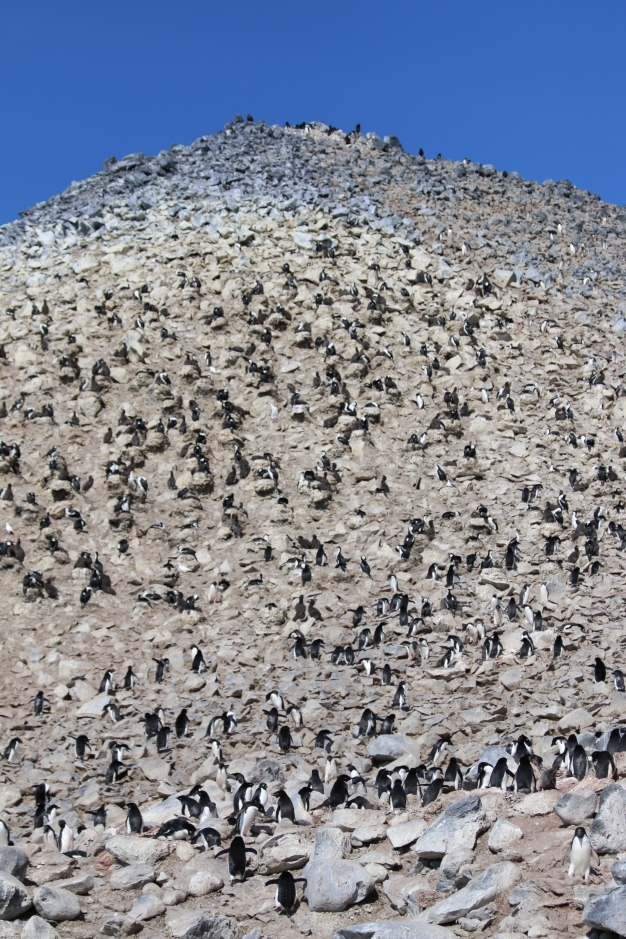 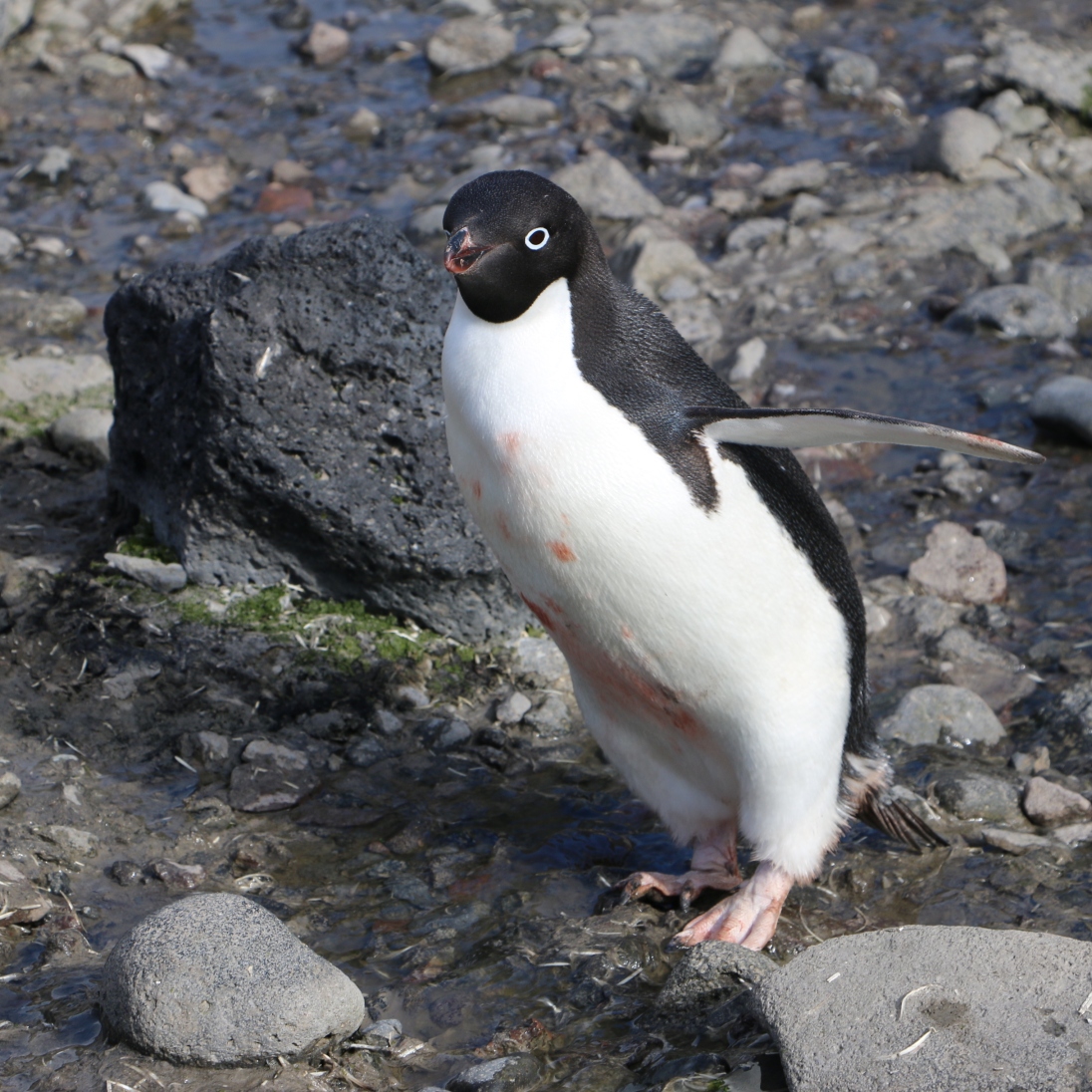 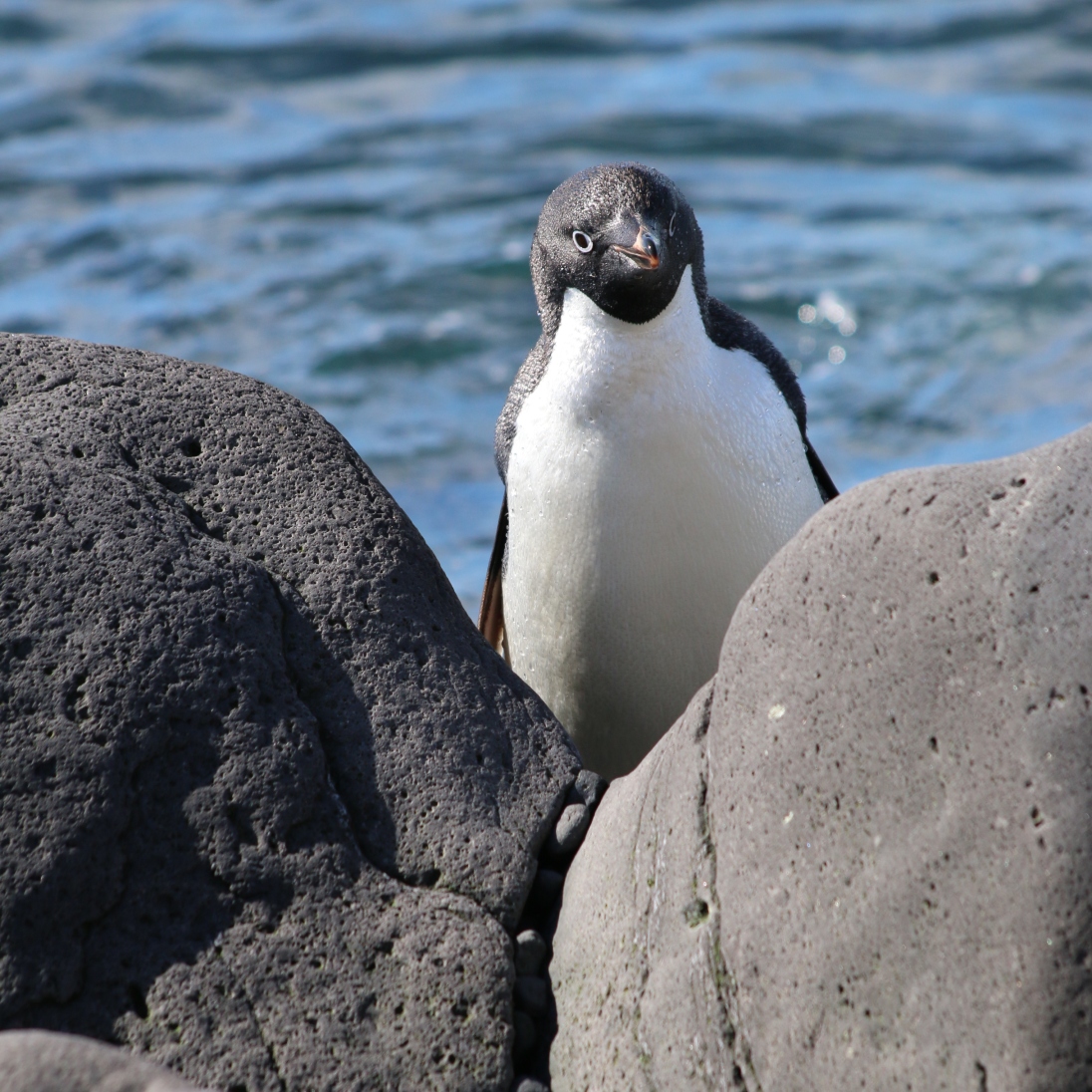 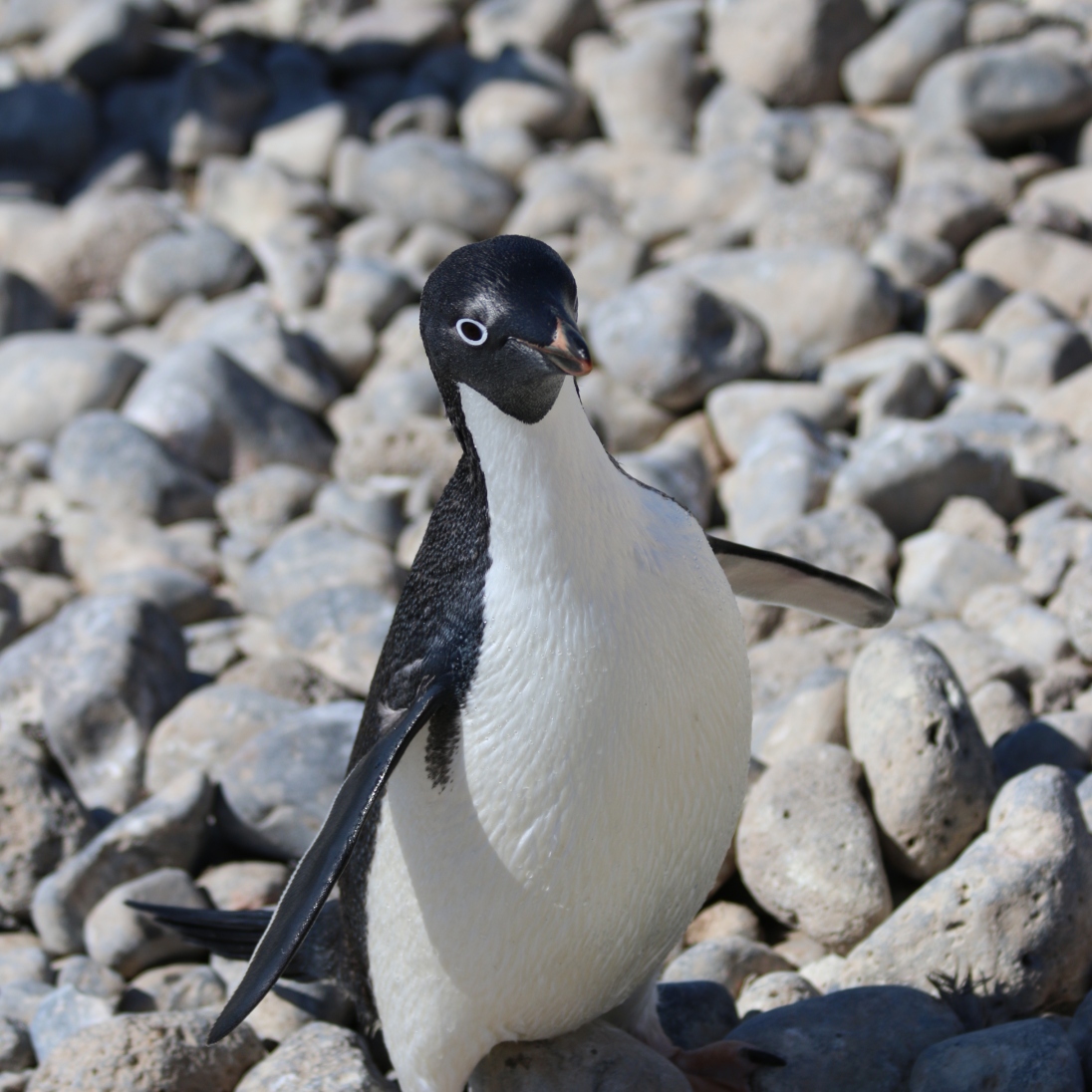 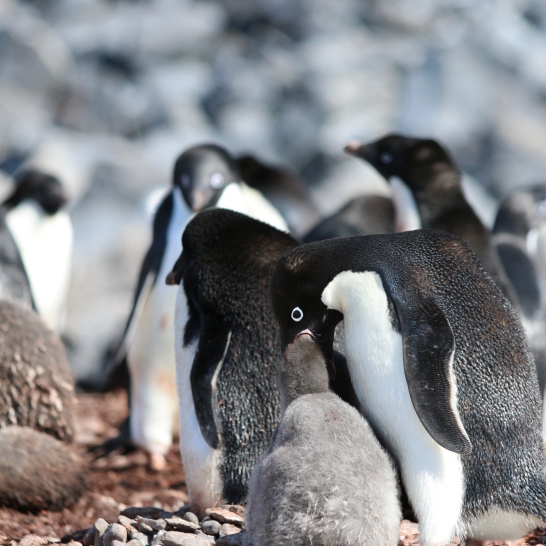 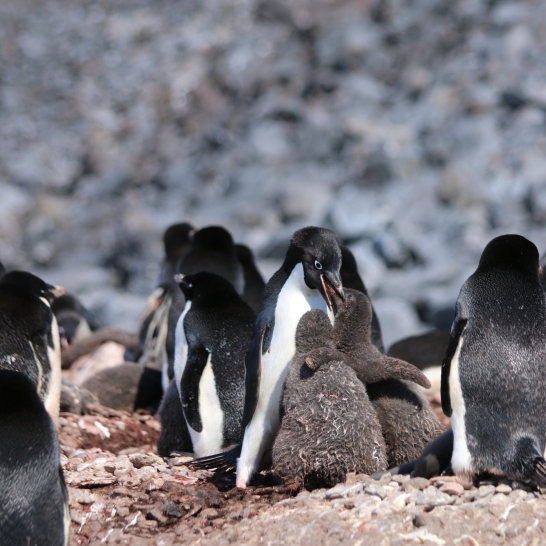 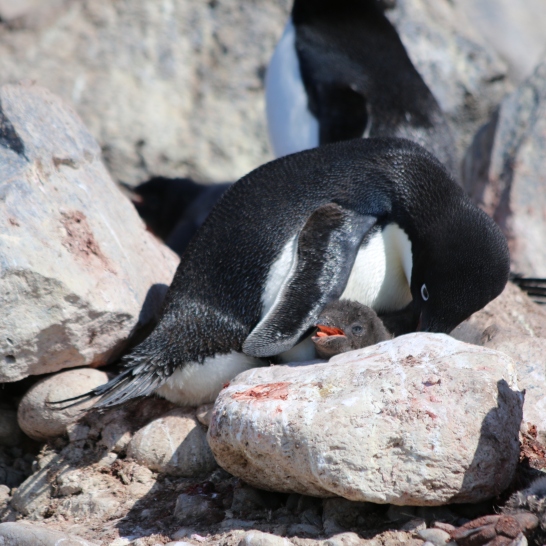 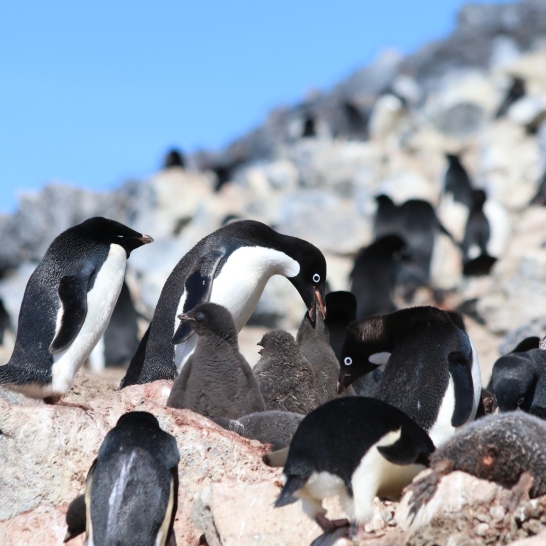 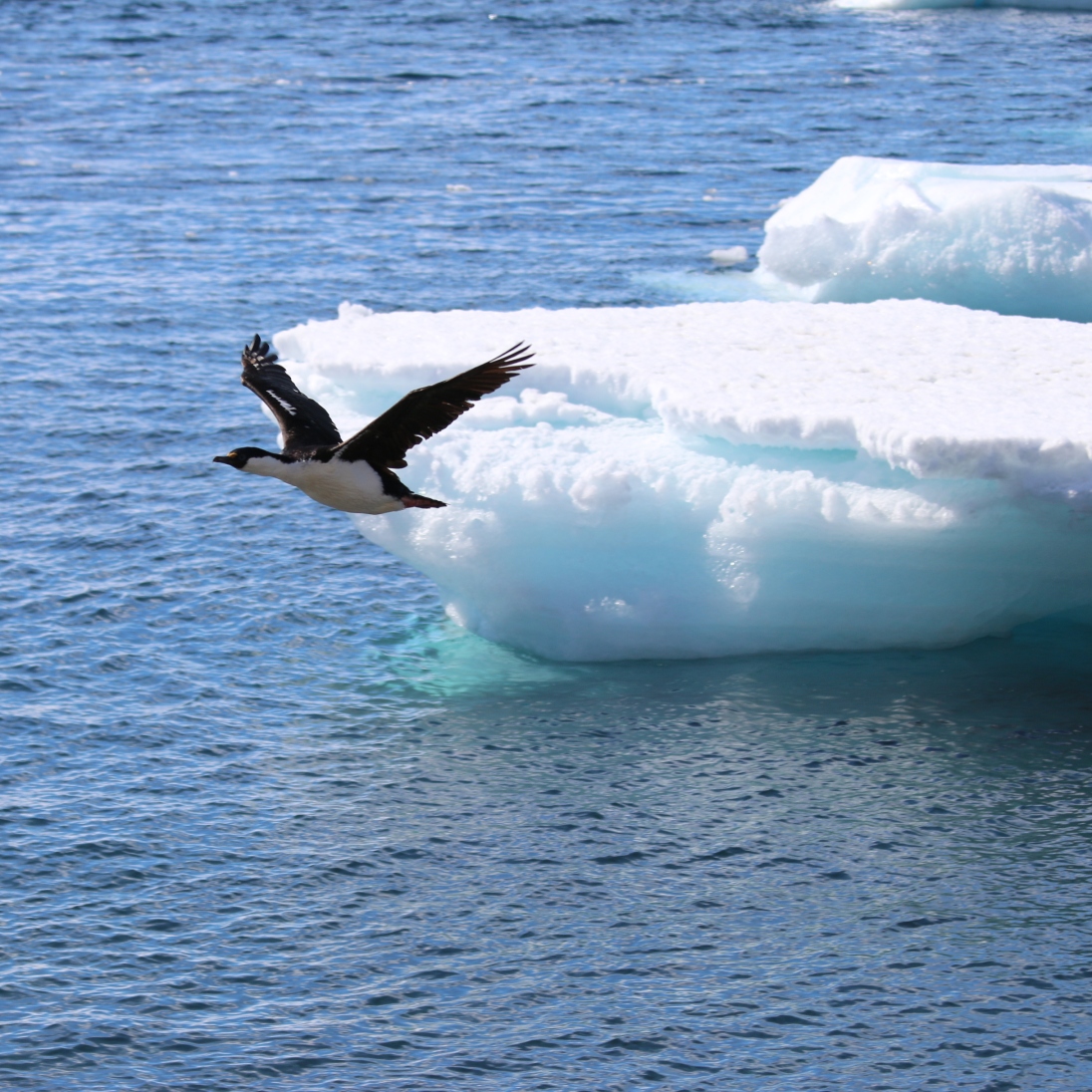 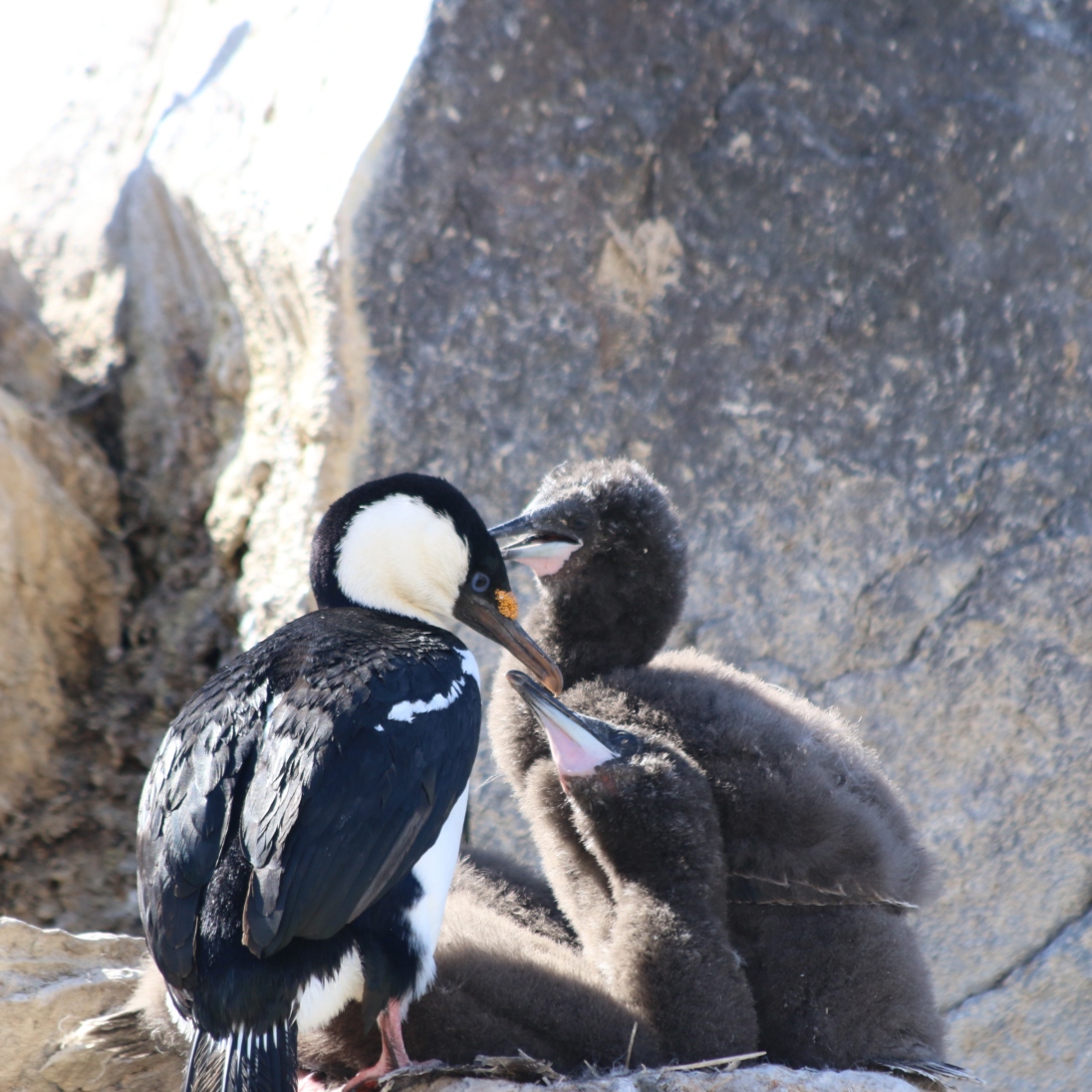 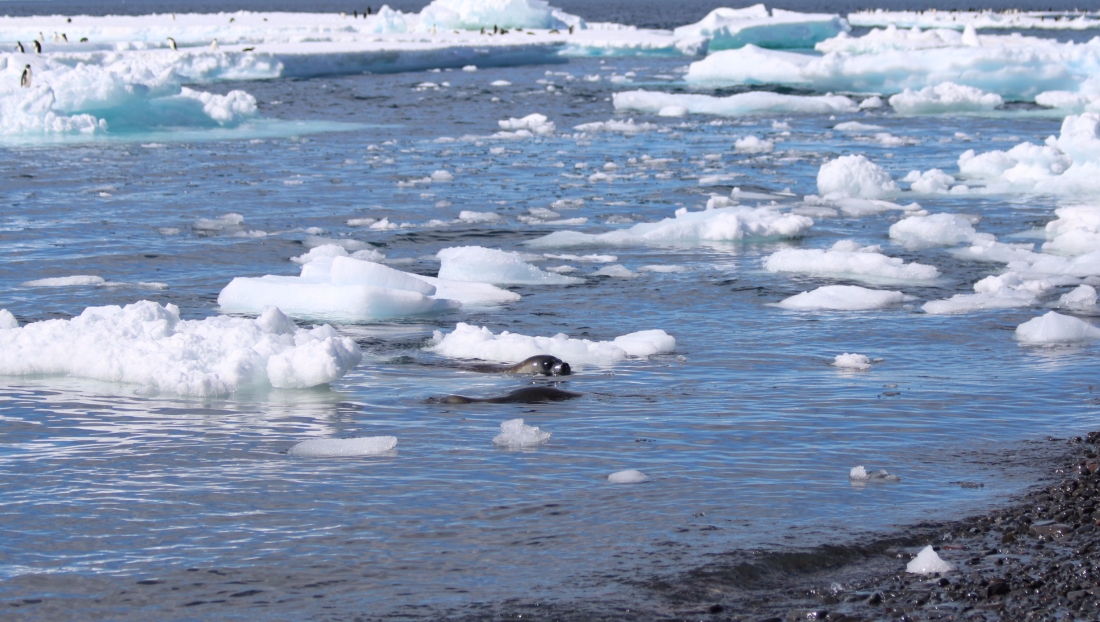 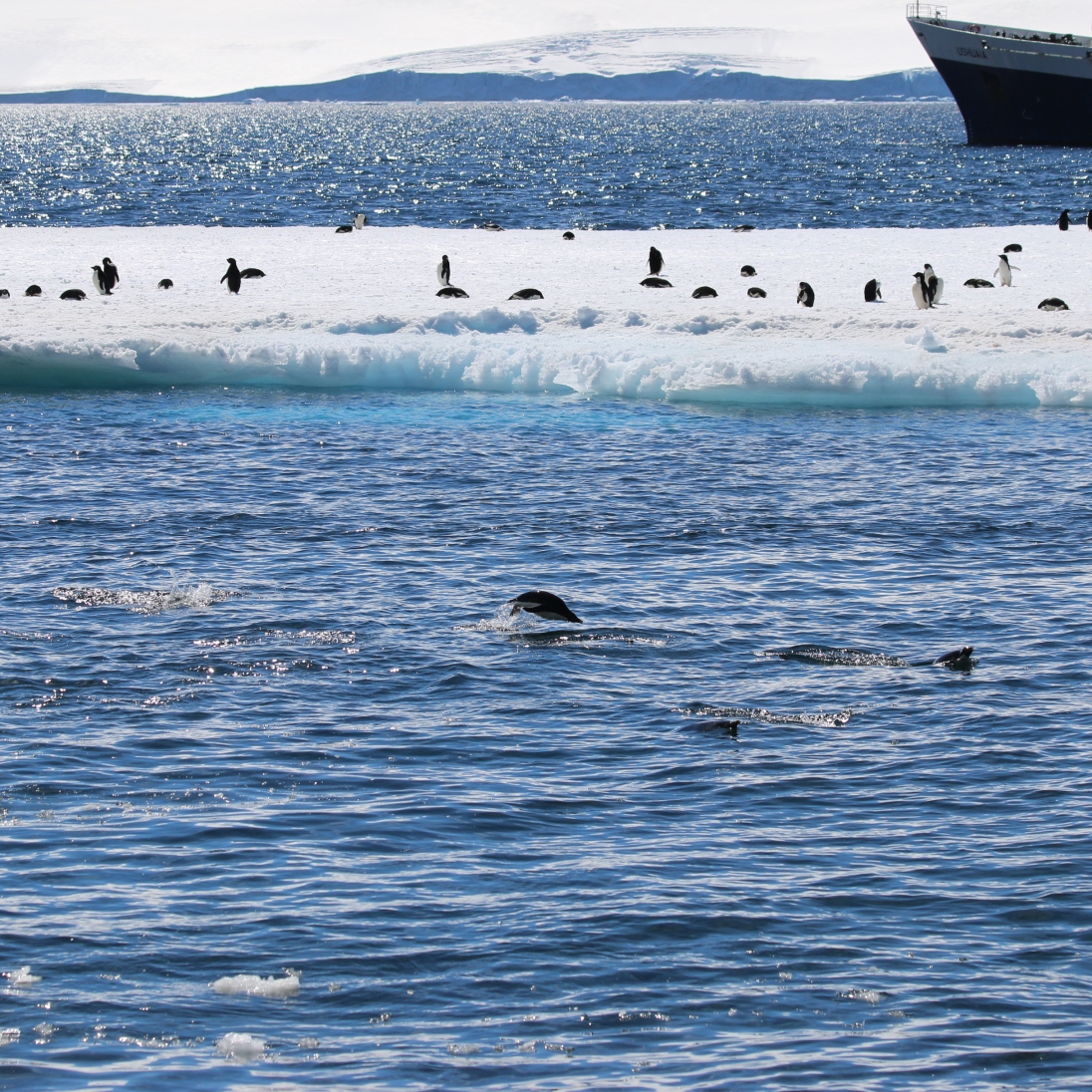 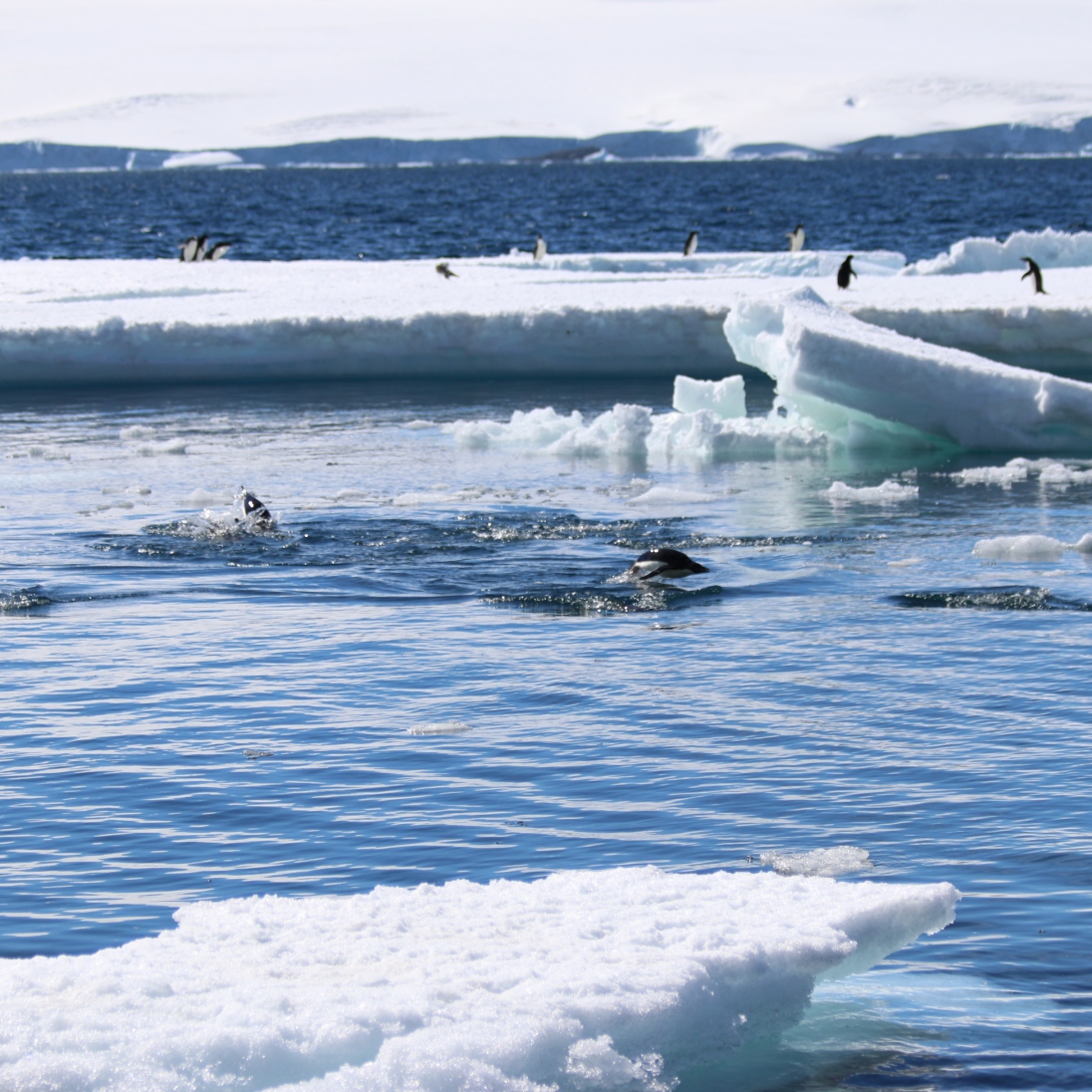 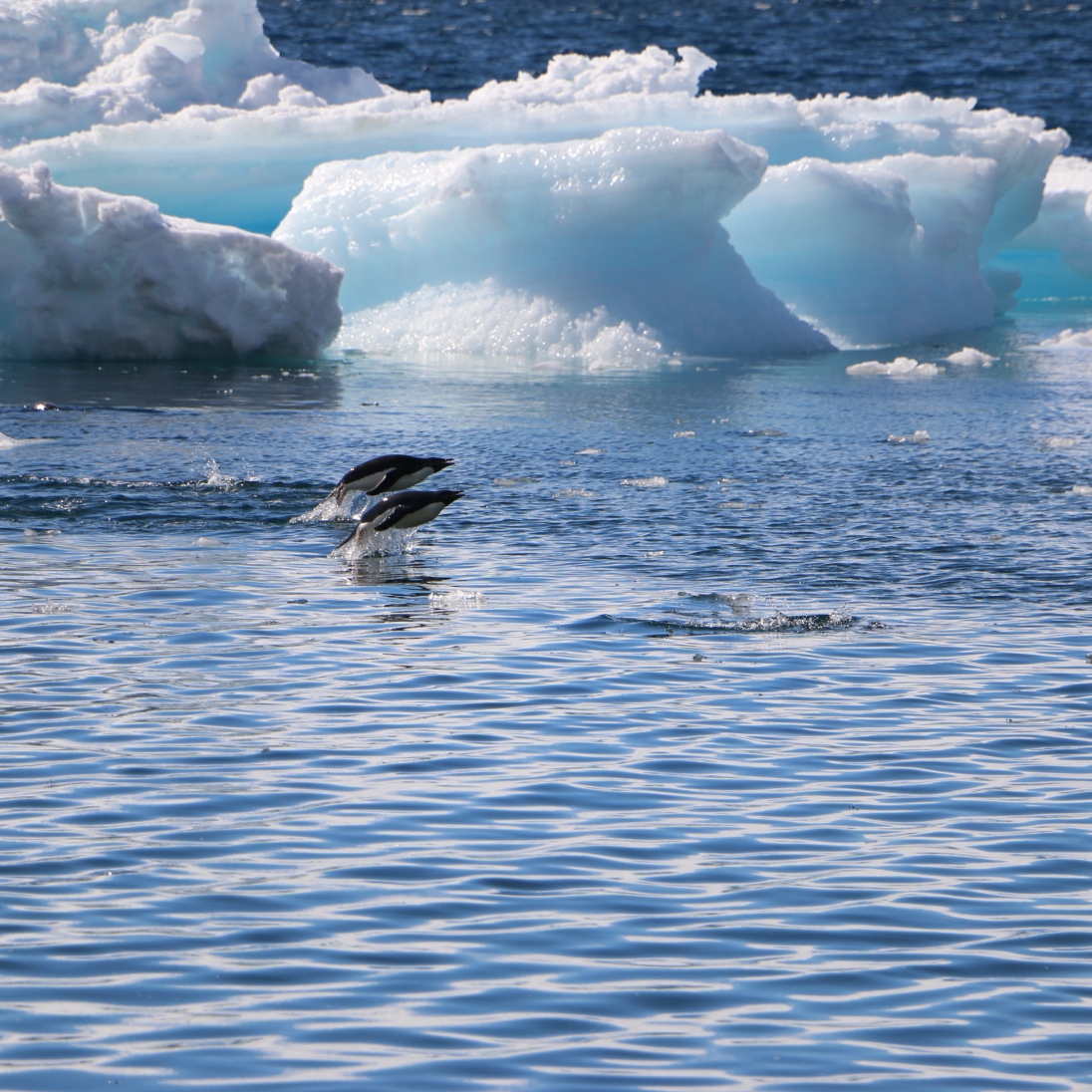 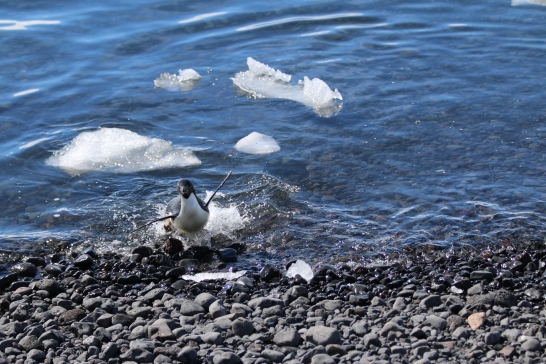 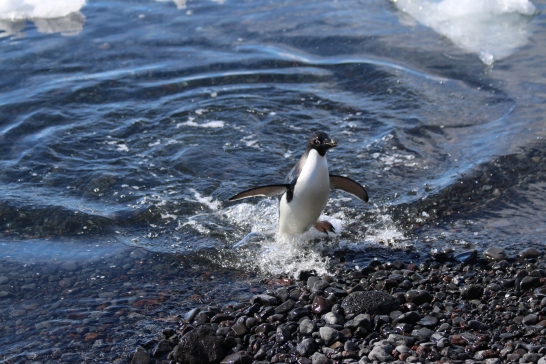 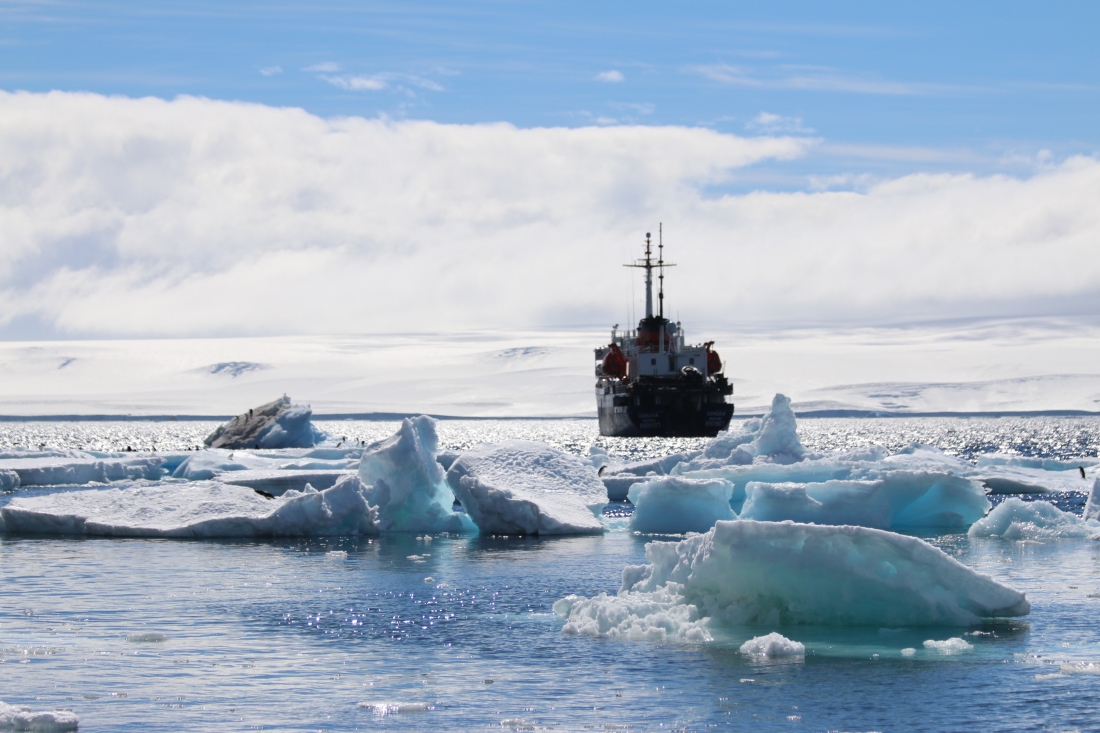 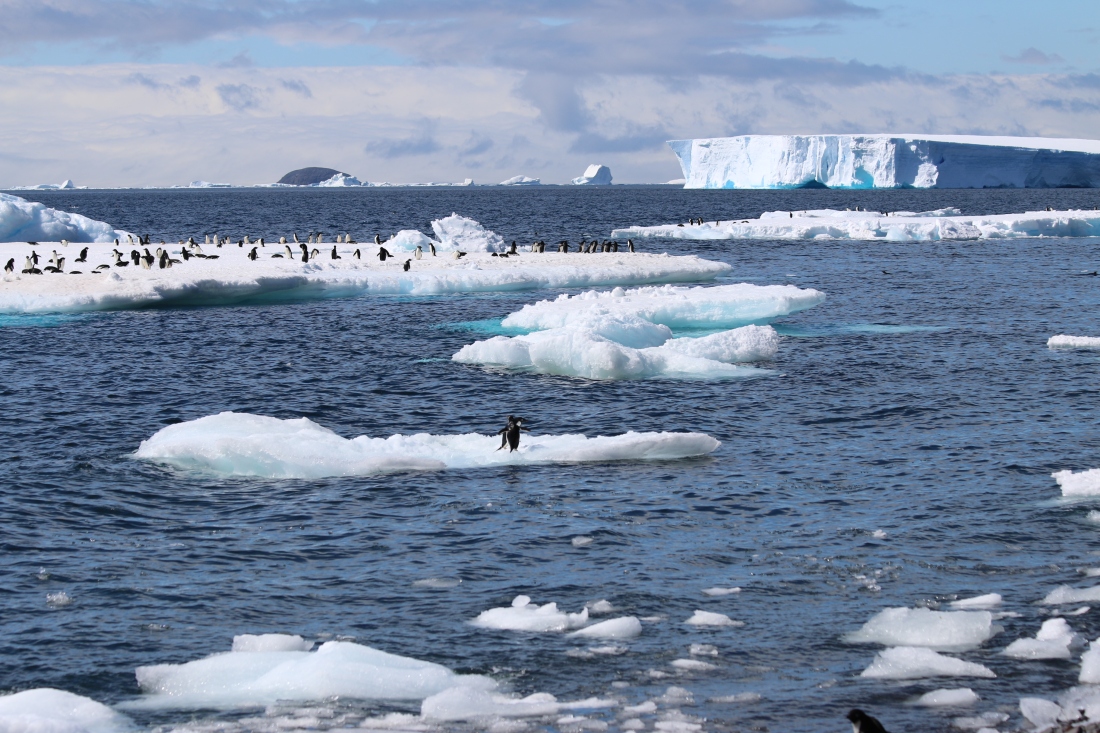