We were supposed to visit the Ukrainian Vernadsky Station today, but this was another landing cancelled on account of ice.  A cancelled landing is disappointing for any number of reasons, but we were beginning to grow concerned as we had not yet set foot on the actual continent.  Each of our successful landings thus far had been on islands along the Antarctic peninsula.  Two of the three cancelled landings had been scheduled at sites on the continent.  Now that we were on the back half of the trip, a sense of urgency was beginning to develop.

The cancelled landing aside, today was hard.

I hesitate to make that statement because it was hard in a very privileged way, after all, I was on a ship in Antarctica on the trip of a lifetime.

To begin with, I woke up in the middle of the night with a wicked stomach ache which kept me up most of the night.  I ended up throwing up, though only once, so I don’t think it was the dreaded “gastro” that plagued others during the earlier part of the trip.  By the morning, I felt miserable and was exhausted – both physically and emotionally.

Leading up to the trip, we had been given lots of advice on how to prepare, what to expect, and suggestions for coping.  For just about everything, I had my own, cavalier, and now in retrospect, highly counterproductive response.  Paraphrasing:

Not only had I not slept well the night before, but I actually hadn’t slept well for most of the trip.  It was so bright in the evenings it was hard to keep track of time.  The end of the day was a chance to wind down and get to know people.  So, even though the clock said it was time to go to bed, every other visible and social cue indicated otherwise.  This interfered with my pledge to get to bed early.

In most circumstances, I don’t think it would be hard to be on a ship with 80 women for 3 weeks.  But 80 highly qualified and intelligent women in STEMM is a completely different story, especially if you’re participating in an intense leadership program.  It’s not often that being a pediatric surgeon feels vanilla.  It was unnerving.

(A few days later a member of the cohort would bravely stand with a quiver in her voice and comment that it was difficult to witness other members of the team progress through the program with ease while she felt like she was struggling.  Based on the response from the rest of the room, it was clear many of us felt the same way and it was a huge relief to know I wasn’t alone in my feelings.  I was so impressed with this teammate’s composure and her willingness to share her feelings.  I was also surprised to hear it come from her because in my eyes, she appeared to be thriving.  I will be eternally grateful for her honesty and vulnerability.)

The program was mentally draining in ways I hadn’t anticipated.  Looking inward and begin truly honest was tiring.  I was exhausted when I arrived, the program was wearing on me, and I wasn’t sleeping – not only were my batteries not being recharged, they were completely spent.

So, here I was, exhausted, stressed and not feeling well.  And, I was alone.  Remember the excitement I had about not having a roommate?  Yeah, pretty ironic…

My attempts to sleep-in were thwarted by the sunlight, overhead PA announcements and the general hum and motion of the ship.  Somewhere around the middle of the day, an announcement was made cancelling the landing due to icy conditions.  The sunlight was bright and the surroundings beautiful.  We had reached our furthest point south – somewhere between 65 and 66 degrees South and the group assembled on the deck for a photograph.  I didn’t make it to the picture, but I needed to get out of my room, to get some fresh air, so I dressed and went outside.  As always, the view was spectacular.  (Fortunately I was able to hide behind my sunglasses.) 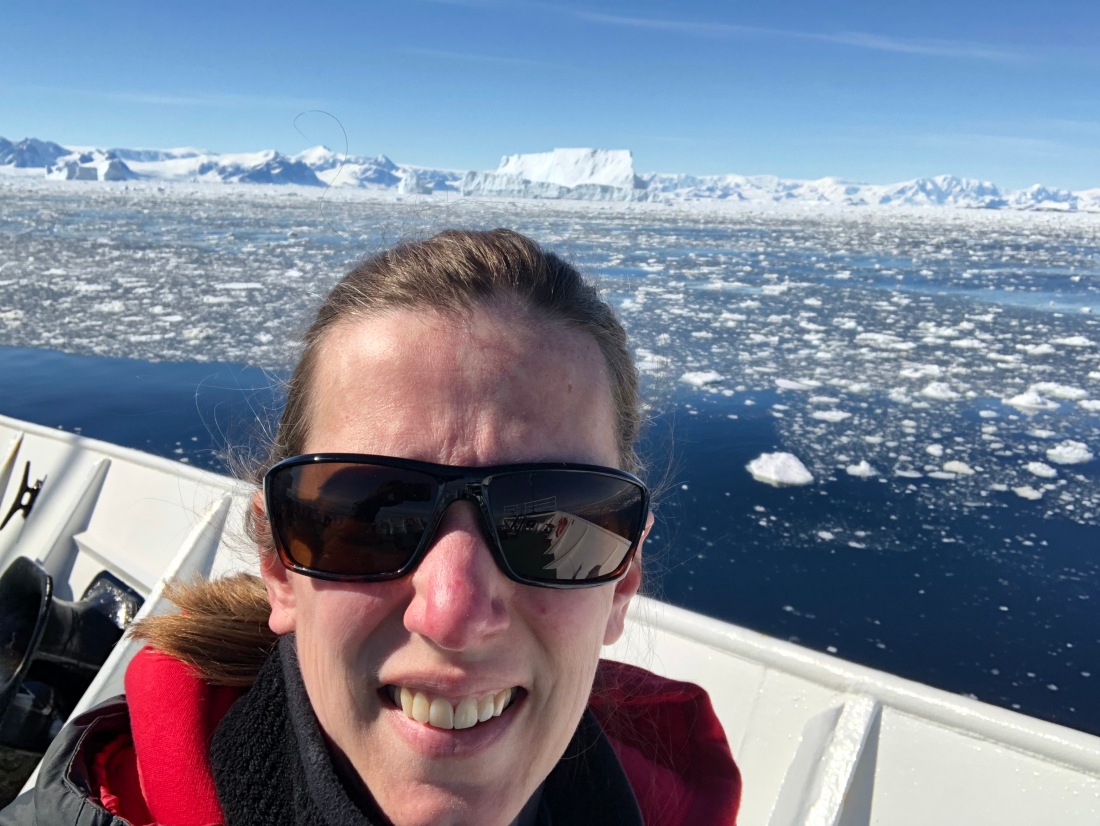 While on the deck, I ran into a teammate who I knew had struggled with sleep earlier in the trip.  I mentioned that I wasn’t feeling well and why.  She politely told me that while she knew I was a doctor, she thought I should really talk to Sophie (our on board psychiatrist).  I honestly hadn’t thought about it, but I was very happy a short while later when Sophie knocked on the door to my room.

Sophie Adams was a member of the HB2 cohort and returned this year as our on-board mental health clinician.  Being able to open up with a fellow physician about myself, my experience with the program, and my overwhelming exhaustion was a relief.  We both agreed I needed a couple good nights of sleep which were made possible by the wonders of modern pharmacology.

I spent the remainder of the day in my room missing out on the day’s program, including the third, and highly acclaimed, talk by Christiana Figueres.  I was also a little homesick. I missed my bed and curling up with my dog.

Today was clearly the low point of the trip for me.  As the self-acclaimed Queen of Resiliency, I had been knocked down a few pegs.  Honestly, I think I had it coming.  Despite this, I still learned a few things.  1)  It’s good to have roommates.  2)  Circadian rhythms are not to be underestimated.  3)  Constantly comparing yourself to the people around you can be counterproductive.  4)  No matter how tough you think you are, sometimes you need to ask for help and there’s no shame in doing so.  In fact, it even feels good.

(My only correct preconceived notion was related to being cut off from civilization.  While I missed talking to my parents each night, I did not for a single second miss the dings, chirps, and buzzes from any number of devices that go off at all hours of the day.  Since returning home, I’ve kept my phone on silent (work permitting).  It’s a small act of post-Antarctica defiance.)