Today was a busy day – emerging issues, peer coaching, science themes, visibility, and a landing at Base Brown.

Base Brown is an Argentinian research station and was previously a year round site.  However, in 1984, the base doctor was ordered to stay on site through the winter.  Rather than spend his time isolated at the station, he  burned it down.  (I suspect he spent some time in isolation elsewhere following this move.)  When the base was rebuilt, it was changed to a summer-only base.

We didn’t really the station per se, rather the station crew were gracious hosts of the magnificent scenery.  Critical to this this magnificent scenery – it was located on the continent.  We finally had our chance to set foot on Antartica.  In the process, and unbeknownst to us at the time, we made the transition from Expeditioners to Antarcticans.

Each morning, Monika, our expedition leader would wake us up around 6:30 am with an announcement over the PA system.  “Good morning, good morning.  Wakey, wakey.  Good morning Expeditioners…”  Typically the date, time, location, brief weather update and a reminder of 7 am breakfast would follow.  Following our landing at Brown, however, we were promoted from Expeditioners to Antarcticans in the morning greeting.  It felt like we had been shown the secret handshake to a special society.  Toward the end of our voyage, Monika gave us an encore performance of her morning announcement so we could make recordings.   (Clearly few of us would otherwise capture it since it was our wake-up call.)  This video is included purely for the audio track.

Even though we were on the continent, we remained some 1500+ kilometers from the South Pole.  Still this is closer than I have ever been, though too soon to say if the closest I will ever be.

This is the view of the base from the ship.  You can see the orange buildings right along the shoreline.  Behind the buildings the land gradually slopes up to the top of the rock face in the foreground.

This is the view looking down from the top of that slope. 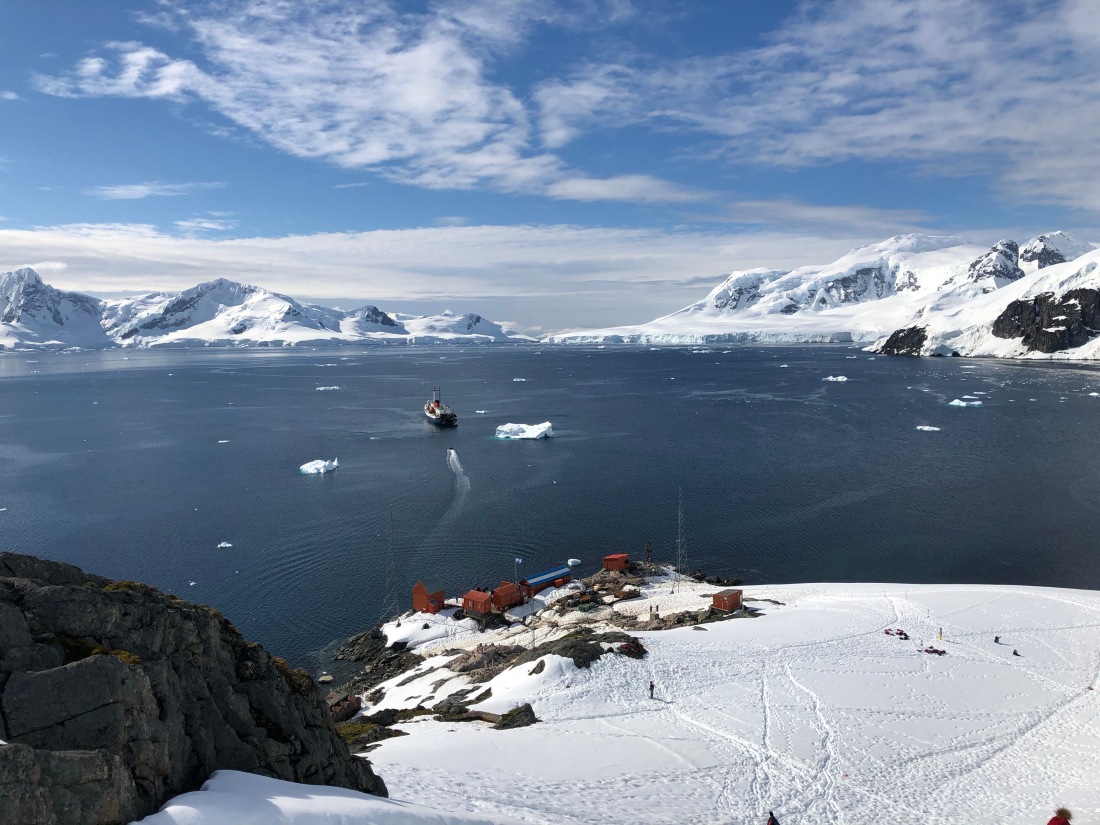 It was, however, very much a matter of perspective.  While we seemed to be at significant height, all we had to do was turn around to be reminded we were no where near the top of the mountain. 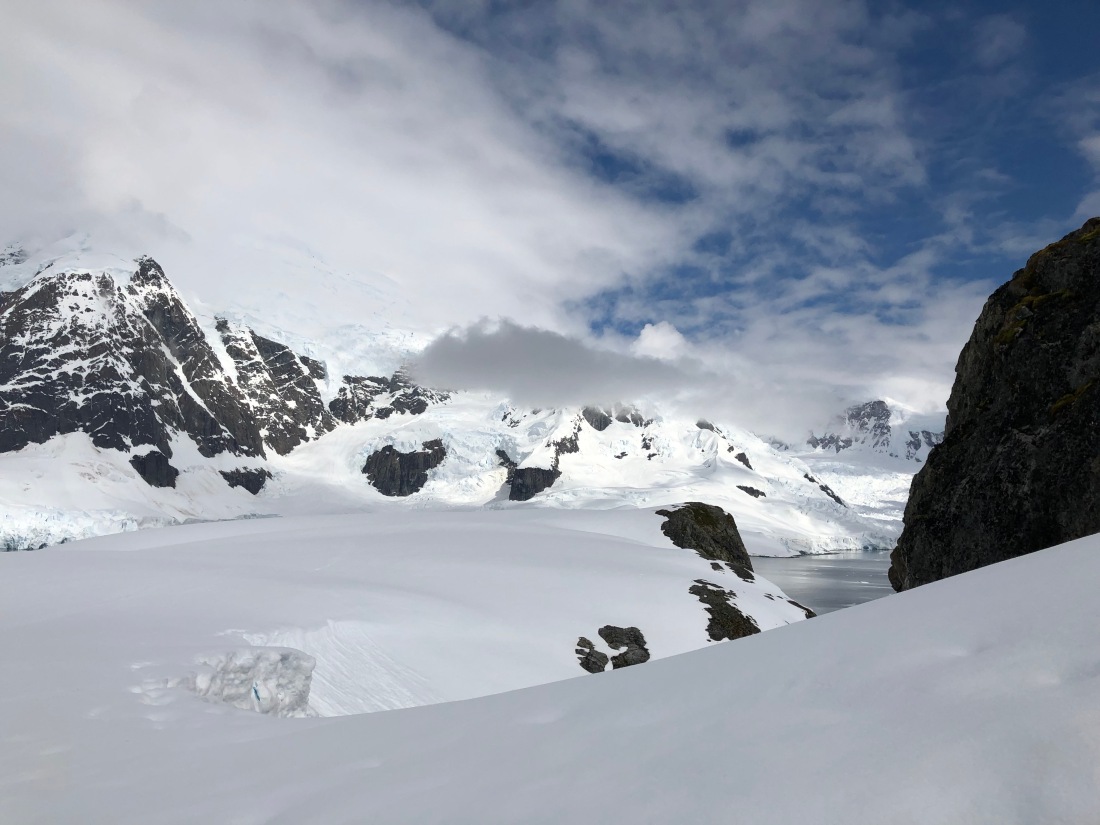 It was thrilling to know we were on the continent, but again I found myself awed by the majesty and forces of nature.  Surrounding our perch on the slope, there were several glaciers in the valleys converging on the water.  Sitting in the snow, we could hear intermittent rumbles in the background, reminiscent of thunder.  But rather than thunder, it was the noise of the glacier shifting, flowing toward the ocean.  Simply put, it was amazing.

There was also flora and fauna to take in at the station.  When it comes to flora in Antartica, it’s basically mosses, lichens and grasses.  Admittedly, I probably would not have noticed any of them, but Sharon Robinson, a 12 time Antarctic expeditioner and one of our on-board science faculty is a researcher of Antarctic plants.  Her passion was contagious and she opened our eyes to something I know I might have otherwise missed.  Honestly, that was one of the great themes of our Homeward Bound experience.  We all had our own passions and we were in an environment of contagious curiosity where we could share these passions and spark new interests. 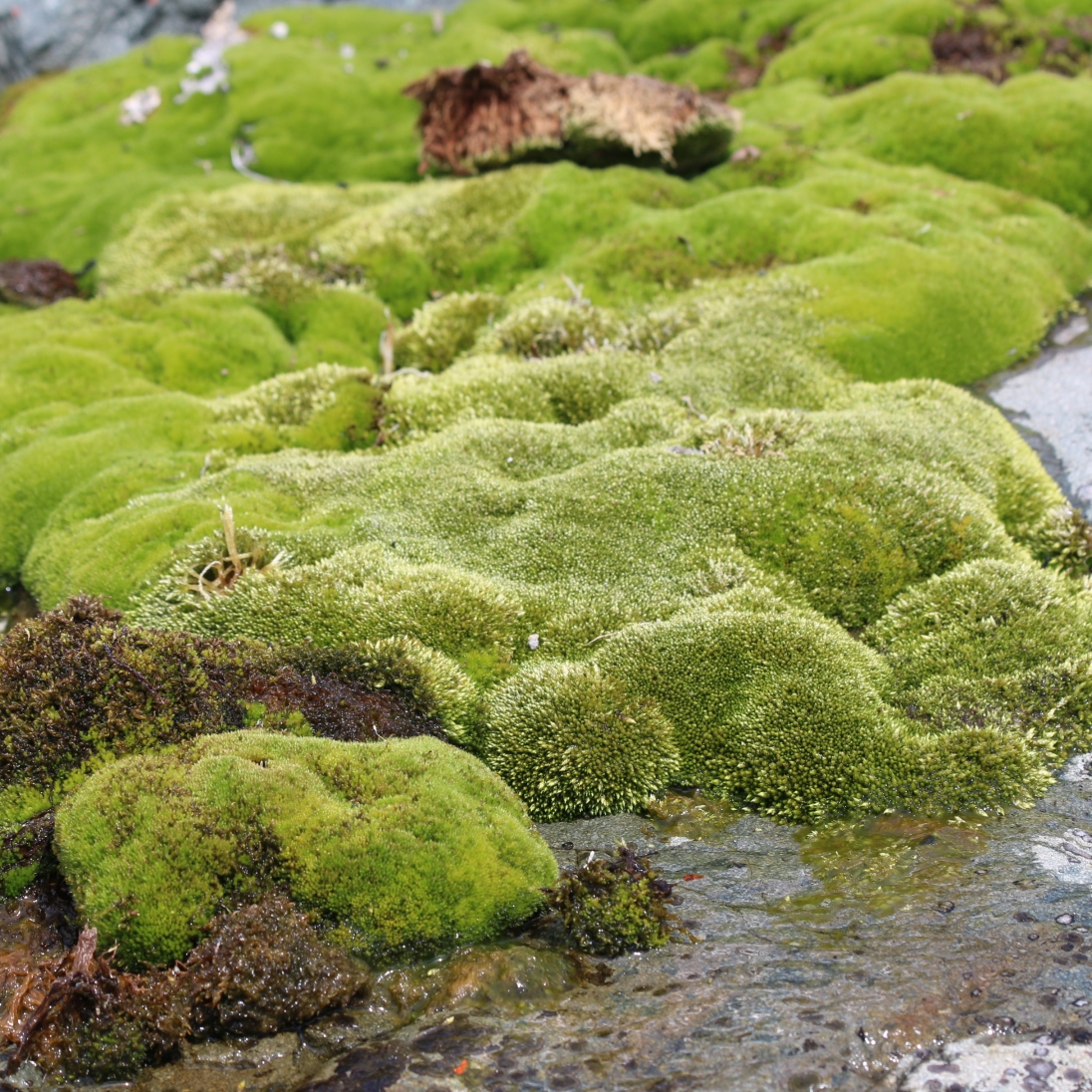 Sharon and members of the team take a closer look.

Of course there were penguins too.  I love how prominent the feet are in this image.  It’s almost as if they don’t belong or should be connected to a larger animal.

And then to see the undersurface as this penguin kept scratching its head.  It was different than what I expected. 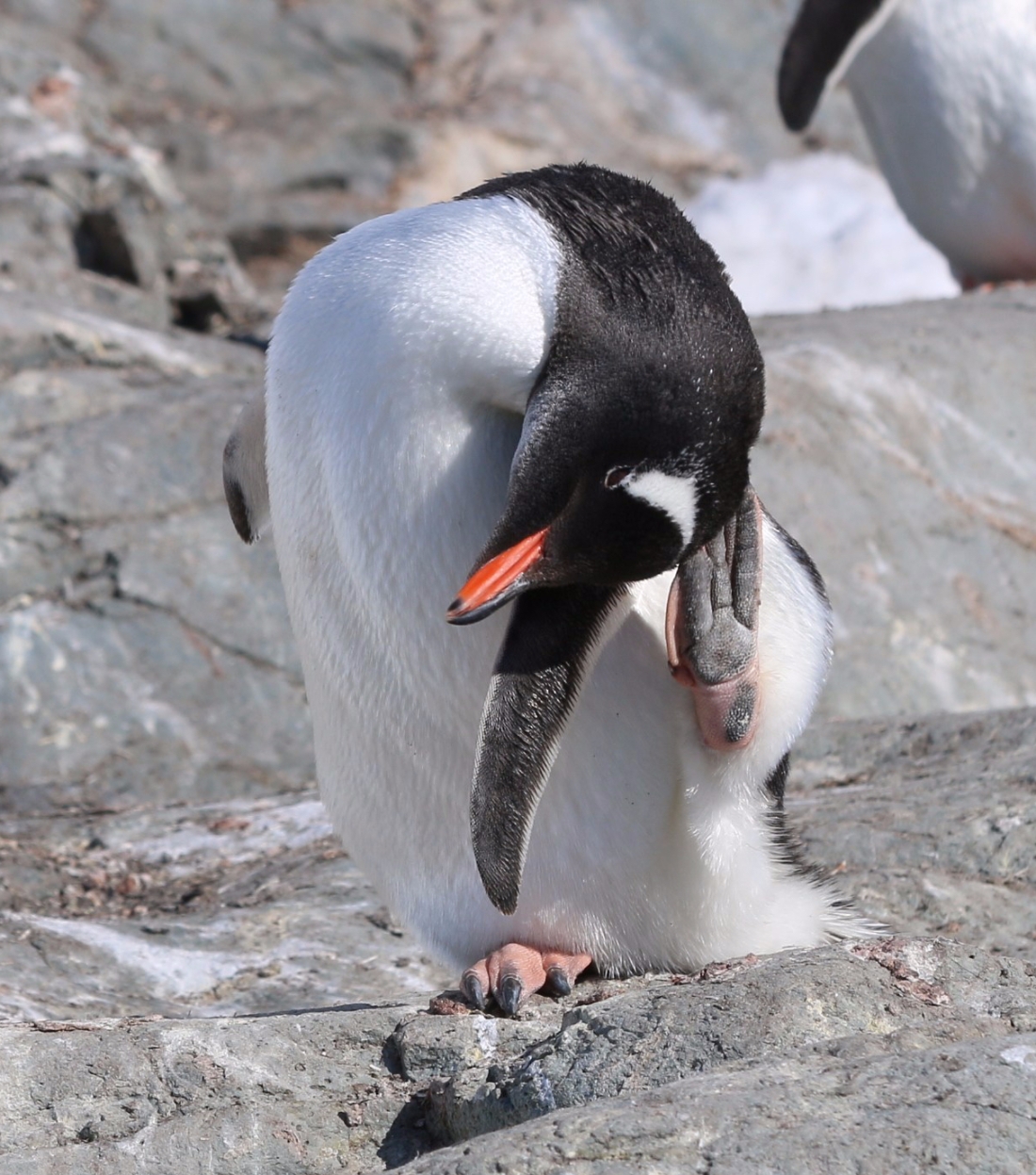 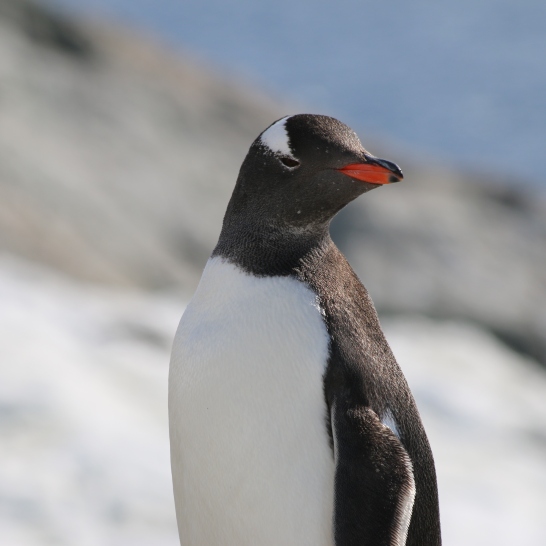 These subsequent pictures speak for themselves and I would only do a disservice adding words. 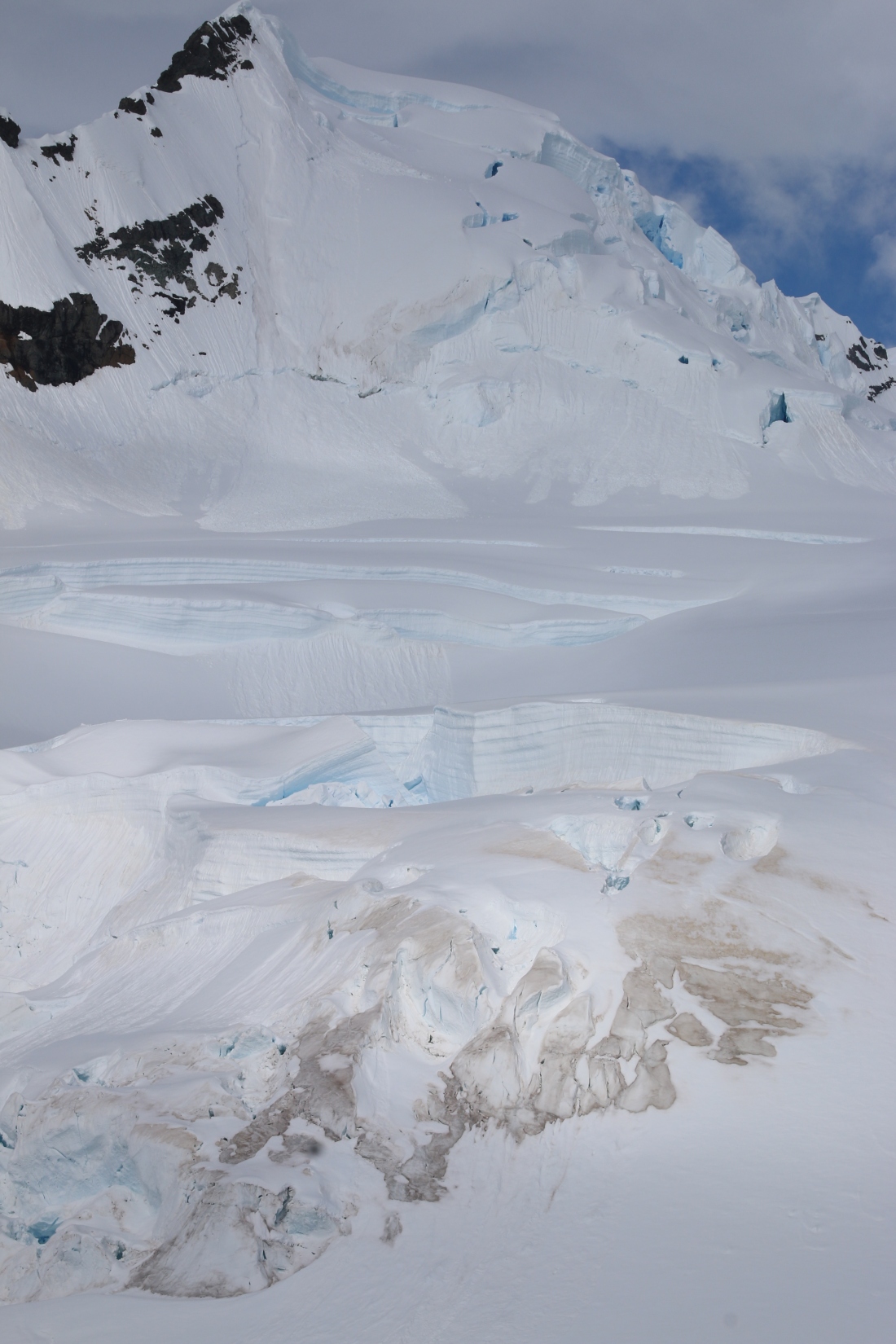 Back on board the ship, my science theme worked on putting the final touches on our presentation for the next day.  (You will have to manage the suspense until my next post.)

In addition to overseeing our science theme work, Glen and Glenda make social rounds, practiced yoga, and helped set the schedule for the next day.